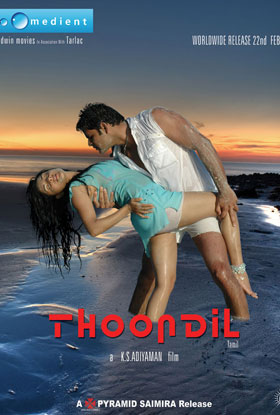 Divya (Divya Spandana) is an upcoming model in London who meets Sriram (Shaam) & falls in love. Sriram sacrifices his love so that she can make it big as a top model. Divya does achieve her dream but is now on a revenge romp to wreak havoc in Sriram's happily married life.

Mediente in association with Good Win Films & Tarlac present 'Thoondil'. The film is written and directed by K S Adhiyaman and produced by Manu Kumaran.

The creative behind-the-scenes team is led by T Anandha Kumar director of photography, production designer Jana, editor Udhayasankar. D.F.Tech and choreographer Dinesh & Kandhas. The music is by Abhishek Ray and the lyrics are written by Naa Muthukumar.