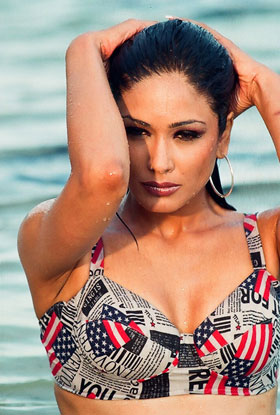 Five to one may sound like fairly good odds, but it depends upon the game: when the 'one' is one very irresistible woman and the 'five' are five best friends, members of the coolest boy band of the country and who as a motto stick to pals before gals... the deck is pretty stacked.

When sweet and sexy Rea captures the hearts of five, it's a recipe for disaster, and the end of everything the boys stand for their friendship, their music and their career. As the clock ticks and gal comes before pals, the boys need to rediscover themselves, search for the magic that brought them together and reunite once again for the performance of their lives that will put them and their music in national spot light.

Featuring A Band of Boys, this part autobiographical part fictional film on their lives is a follow up to their hugely successful debut album Yeh Bhi Wooh Bhi.

Eros International in association with Mediente present 'Kiss Kis Ko'. The film is written by Pankaj Kapoor and directed by Sharad Sharan. Manu Kumaran and Ram Punjabi are the producers.

The creative behind-the-scenes team is led by Santosh Thundiyl director of photography, production designer Narendra Rahurikar, editor Suresh Pai and choreographer Raju Khan. The music is by A Band of Boys (ABOB) and Vikesh Mehta.