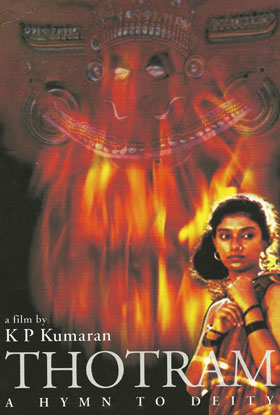 Twelve years after winning the national award for his film Rugmini, K P Kumaran brings to life a pre-vedic hymn to tell a tale of women empowerment in his film.

The story of Poomatha, a young girl belonging to the 'puluva' community, is told in the Vadakkanpaattu, the folklore of Northern Kerala. The feudal lord of Kadalungara village takes a fancy for Poomatha who lives alone. When, even after being assisted by his steward Chindan, the lord finds that Poomatha doesn't yield to his wishes, he frames charges of adultery against her.

Members of her community, i.e, the puluva community, find her guilty of the crime and she is torched to death. But, just before she dies, her innocence is proved by the confessions of the girl who had given the statement against her. Those of her community, who had started hating her, start fearing her spirit and worship her. And her story thus became part of the 'Thotram', the song accompanying the temple dance Theyyam.

Thotram is a tale of woe, suffering and exploitation of the lower class of the society in the days of feudalism. It is from the pages of Kerala's rich folklore that K P Kumaran adapts the story of Poomatha.

Mediente presents 'Thotram'. The film is written and directed by K P Kumaran and produced by Manu Kumaran. The creative behind-the-scenes team is led by B Kannan director of photography, editor Ajith Kumar and music composer Ramesh Narayanan